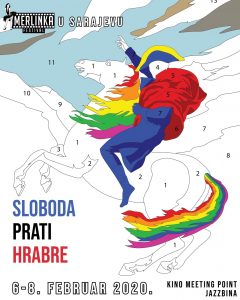 For the eighth time in Sarajevo, from February 6th to 8th 2020, Sarajevo Open Centre will hold the international queer film festival Merlinka, which has been organized in Belgrade for the past eleven years with the idea of promoting films dealing with LGBTIQ+ topics.

The eighth Merlinka in Sarajevo opens with a focus on personal freedom at 18:00h with the opening of Aleksandar Crnogorac’s exhibition. “TransBalkan” presents a series of photographs of transgender persons from the Balkan region along with brief biographical texts next to each portrait, with the goal to raise visibility of transgender persons in the area. We continue with a screening of the French film, Portrait of a Lady on Fire, which has received the Best Screenplay Award and the Queer Palm at the Cannes Film Festival, as well as 24 other awards and 62 nominations at various international festivals and competitions, including the Golden Globes. The film is directed by Céline Sciamma, with Noémie Merlant and Adèle Haenel in leading roles. A video performance by Selma Selman, a Bosnian-Herzegovinian artist of Romani ancestry, follows the film, and the first night of the festival comes to a close with an acoustic performance by rising Herzegovinian musician Sarah Mihaela Dedić.

On Friday, 08.02, we continue the festival with a focus on freedom of expression and artistic freedom at 17:00h with a conversation about local queer culture and freedom. Moderator Jasmina Čaušević will lead a discussion about the tensions between queer culture, artistic expression, and local as well as global social norms. Our movie night begins at 19:00h with a series of short films from various regions, and ends with the Vietnamese drama Song Lang, which, under the direction of Leon Le, tells the story of an unexpected love between a talented opera singer and a dangerous debt collector. At 22:30h, we move to club Jazzbina for an exclusive performance by the Bosnian-Herzegovinian drag queen, Iva Farrah Durawi, and her guests. The night will go on into the late hours with music curated by DJ jovijah.

The third day of the festival is dedicated to looking back at the rebellious history of the LGBTIQ+ movement and our fight for freedom. We start Saturday off at 15:00h with a screening of several regional short films at Kino Meeting Point, and at 16:05 we present the premiere of Berina Džemailović’s “We Walk for Love, Baby,” a documentary film that follows the first Pride Parade held in Sarajevo in 2019. After this opportunity to see the Parade on the big screen, we will discuss its influence on LGBTIQ+ activism and the lives of LGBTIQ+ persons in Bosnia-Herzegovina. We close our film program with Reinhold Bilgeri’s Erik & Erika, a true story about an intersex ski sensation and the injustice he experienced in Austria during the 1970’s.

Our final night entertainment program begins at 22:00h with opening group FRQA’s musical stylings that will make us all dance until the party continues with the lefthanded electro-pop-rock-disco-boyband duo from Pančevo, Buč Kesidi, who will help us discover if there is love in club Jazzbina with the newest hits from their last album, Euforija.

The festival is organized in collaboration with Merlinka Festival in Belgrade, and with support by BiH Open Society Foundation, Swedish International Development Agency (SIDA), and the Sigrid Rausing Trust.