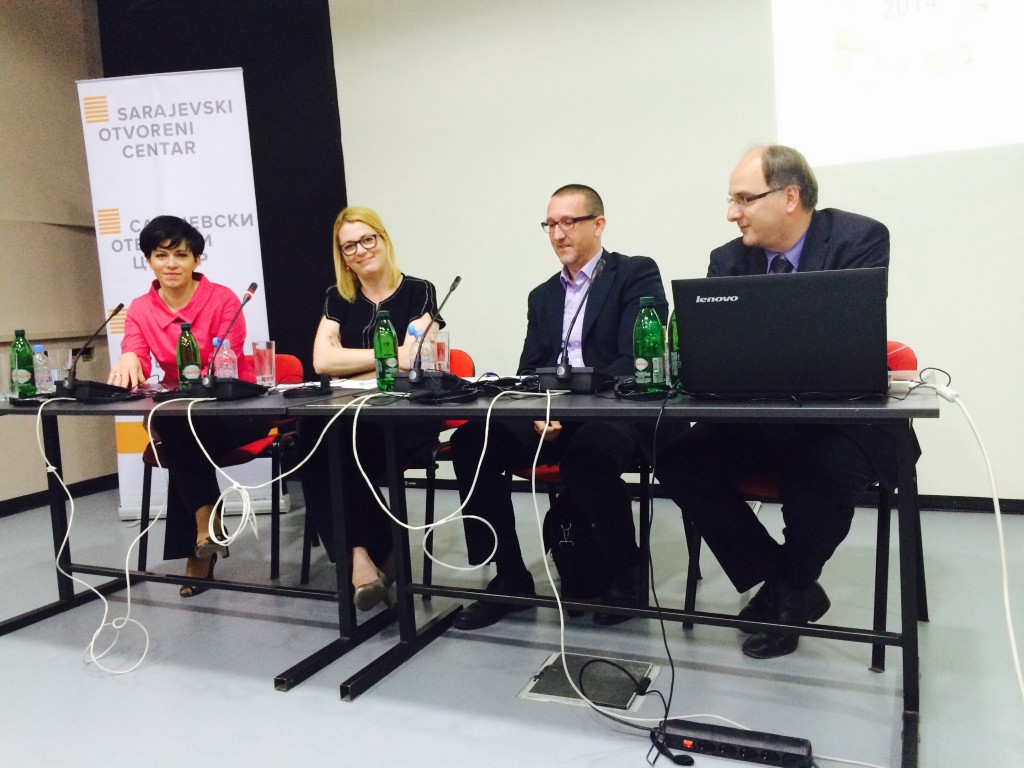 Today, on the occasion of May 17 – the International Day Against Homophobia and Transphobia (IDAHOT), Sarajevo Open Centre organized presentation of reports and panel discussion titled The Role of Political Parties in the Advancment of LGBT Rights in BiH – Current Situation and Way Ahead. This activity is supported by the US Embassy in BiH and Open Society Fund BiH.

In publishing the Pink Report, the only annual report on the state of human rights of LGBT people in Bosnia and Herzegovina in 2014, Sarajevo Open Centre continues with its intensive advocacy work in the field of LGBT rights.

“Although 2014 was, in a way, a year eaten by locusts, three major events should be emphasized: firstly, the failure of the police to adequately protect Merlinka, the LGBT film festival that resulted in a hooligan attack. Secondly, Canton Sarajevo’s Ministry of Interior opened up for more intensive cooperation – more than 1300 police officers were educated on hate crime against LGBT people. Thirdly, the BiH Constitutional Court adopted a revolutionary ruling, which clearly states that BiH failed to guarantee the freedom of assembly, when it comes to LGBT people and LGBT related events. Thus, as the highest judiciary instance in the state, BiH Constitutional Court confirmed that the rights of LGBT people have been violated”, said Saša Gavrić, the Executive Director of Sarajevo Open Centre.

In order to advance the state of LGBT rights in BiH, Sarajevo Open Centre suggests three priority measures that should be taken by the institutions in charge.

The results of monitoring the attitudes of political parties’ representatives in the General Election 2014 campaigns were also presented. Emina Bošnjak, Programme Manager at Sarajevo Open Centre stressed: “These publication offer recommendations for further actions of political parties, calling upon them to work on concrete programs and policies related to the human rights of LGBT people, and to intensify the cooperation and communication with the civil society organizations.”

After the presentation, panel discussion with state level MPs and civil society representative took place. Kristina Ljevak, moderated the discussion with Maja Gasal Vražalica (DF), Damir Arnaut (SBB) and Mervan Miraščija (Open Society Fund BiH) on the political parties attitudes and relations towards the rights of LGBT people, and possibilities for their advancement in the coming period.

Presentation of reports and the discussion are a part of Sarajevo Open Centre’s 2015 IDAHOT programme, available at http://soc.ba/en/sarajevo-open-centres-idahot-international-day-against-homophobia-and-transphobia-programme/.

We would also like to announce the thematic session of the Parliamentary Assembly’s Joint committee for Human Rights on, which will take place on May 19, at 12:00, in the PS BiH building. This parliamentary session is unprecedented in the work of the legislative institutions in BiH when it comes to their efforts in the field of LGBT issues, and, as far as we know, the first thematic session on this topic.