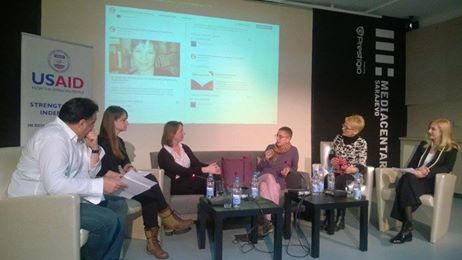 A panel discussion on homophobia in the media was held yesterday at the Mediacenter Sarajevo as a part of the program on the International day against homophobia and transphobia (IDAHOT).

The discussion was a part of the USAID project “Strengthening independent media”. A map of the recorded instances of violence against LGBT persons in Bosnia and Herzegovina, Serbia and Croatia – Homophobia kills – co-produced by Gej strejt alijansa (Serbia), Kontra (Croatia) and Sarajevo Open Centre (BiH) was also presented.

Steve Mayors, the director of the program division of USAID BiH gave the opening speech in which he referenced his personal experiences when talking about the struggles that the LGBT population faces. He also invited everyone to join him at the square in front of the Importanne Center on Friday, at 9pm, to witness the rainbow-colored transformation of the US embassy. Andy McGuffie, the chief spokesperson at the EU Delegation spoke next and expressed his disapproval of the attacks at the Merlinka Festival on Febryary 1st. He also set out the legal framework and guidelines for the protection of LGBT rights at the EU level and expressed the need for better systematization of data and better data collection when it comes to crimes committed against LGBT persons. He also praised the work done by the civil society organizations, particularly the “Coming out” project co-run by the Heinrich Böll Foundation in BiH, CURE and Sarajevo Open Center.

The second part of the discussion was moderated by Aleksandar Trifunović, the editor of the online magazine www.6yka.com, and the participants were Emina Bošnjak from Sarajevo Open Center, Belma Žiga, a psychologist from Krila nade BiH, Valentina Pelizzer, an activist from One World SEE, Duška Jurišić, a journalist and an editor at FTV and Vesna Andree Zaimović an editor of the online portals www.radiosarajevo.ba i www.manjine.ba.

After their introductory remarks there was a dynamic discussion about changing the attitudes of the “silent majority” from hostility and animosity, to, at the very least apathy. The moderator, Aleksandar Trifunović asked those present to watch the Protect every kiss video which sends the message that there should be no violence against kisses. He also pointed out that a calculated and selective approach to human rights cannot be sustained as it only perpetuates the current culture of hostility and violence.