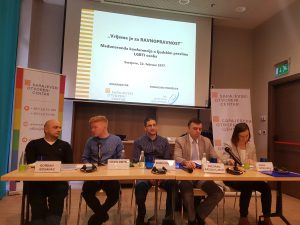 International conference named It is Time for EQUALITY was organized by Sarajevo Open Centre on 22nd of February and financially supported by Open Society Fund.

Conference was opened by Emina Bošnjak – Executive director of Sarajevo Open Centre and Yuri De Boer – Council of Europe, LGBTI Unit. In the opening statement, Emina Bošnjak gave brief overview of current situation regarding human rights of LGBT people in B&H and stressed that one of the main problems that LGBT people are facing is violence and violation of body integrity. She also emphasized the need for legal recognition and regulation of same sex partnerships, adequate legal protection and proactive actions in the field of protecting trans* and intersex persons.

Representative of Council of Europe, Yuri De Boer opened his speech by reminding everyone that violence against LGBT people is still widespread and that the role of the government is to react and condemn violence and ensure equal opportunities to LGBT people in B&H. De Boer also emphasized the need for legal recognition of same sex partnerships and said that it is important to work on recognizing different gender identities. „Every person, regardless of their gender identity, has to be recognized “, sad De Boer. In his speech, he addressed the necessity for simple and accessible administrative procedures regarding sex change in personal documents and once again stressed the importance of the right to self-determination. He also mentioned how important it is to raise the awareness about intersex people and influence decision makers. “The government has to approach these topics systematically and create national action plan”, he concluded.

Gordan Bosanac started his speech with the name of the panel discussion and focused on the word conservative and tried to explain the relation of LGBT community with that word. He presented Croatian example where 85% of citizens were against same-sex partnerships first time when the bill was in parliament in 2000. In 2014 results were completely different and sizable part of population was now in favor of it. Still, majority of population was against the same-sex partnerships but the law was passed and since the August of 2014. Croatia has the law that regulates same-sex partnerships. Gordan stated that Croatia still is fairly conservative society but that has not stopped majority in parliament to give their support for LGBT community by passing the Law.

He explained how important it was that the strategy for campaigning was focused on nonjudgment based on political affiliation. It was important to “understand fears that aroused from the idea of equality” because “human rights talk does not address fears in society”, he stated.

He pinpointed the strategy for raising people awareness how violence is unacceptable as crucial and that it is a minimum that was sufficient to continue with. He also mentioned that this kind of strategy does not depend on the level conservativism in society. As an example, he mentioned the case of attack on gay party in the club SuperSuper in Zagreb where public reacted very condemning on the violence that happened. Even the president of Croatia, who is known as a representative of conservative policy, condemned the violence.

During his speech, Goran mentioned the discussion that was ongoing during the creation and implementation of the Law, where the institution of marriage was separated and placed as opposing to the institution of same-sex partnerships, which in the end was one of the reasons the Law was passed. Bosanac phrased the situation as temporal social consensus. One of the most positive aspects of the campaign was that the public discussion about same-sex partnerships was finally put into the spotlight and became widespread. It promoted thinking and discussion about the topic and everybody had an opinion about it. Still, he emphasized that this is the time of neo-conservative movements in Europe and world and that we have to bear that in mind. As a consequence, planning the adoption strategy is not on the agenda of LGBT activists in Croatia at the moment. In his opinion, current strategy should be defending the liberties that were achieved so far. Bosanac mentioned the importance of adapting to the situation and finding alternate ways to fight for the rights of LGBTI people.

Predrag Raosavljević from Institution of Ombudsman B&H used this opportunity to present Special Report about Rights of LGBTI people in B&H, first of its kind made by one of the state institutions, that refers to recognizing human rights of LGBT people in B&H. He emphasized that the report has for its goal to promote strategy that would lead to better legislative procedures for LGBTI people in B&H. He reminded everyone about Law on Prohibition of Discrimination in B&H, its enactment in 2009. and adjustment of the terminology in 2016. The biggest problem in B&H is violence that is not reported and stated the facts which in the end give some encouragement – in the last few years, number of reports and lawsuits is increasing. The report was promoted on December the 6th 2016 with the aim to present to state institutions and society all the problems that LGBT community faces. During the writing of the report, Ombudsman contacted different levels of government, academies, experts from different field, NGOs and special attention was given to the role of media.

In his conclusion, he stated that just 100 years ago, term marriage was term exclusively defined as a union between man and woman, but that has changed. A lot of changes in current legislation and completely new laws have to be passed in near future and that is something that is inevitable, he stated. Ombudsman’s Special Report does not suggest in what form should their recommendations be recognized but pinpoints clear goal: It does not matter in which way the equality will be achieved, by drafting new law or rewriting current one. Enacting such legislation is a “moral imperative” if we consider democratic characteristics of B&H society, he concluded.

Boris Krešić started with remarks how family law has one of the longest histories comparing to other areas of the law and how difficult it is to change it since it is deeply rooted in tradition. On the other hand, European Convention on Human Rights is, according to constitution, above every other law or regulation in Bosnia and Herzegovina. He also said how a lot of European countries “pushed” existing laws with the help of jurisprudence of European Court of Human Rights. He gave example of France that has legalized adoption of kids by same sex partners that way. On the other hand, example of Nordic countries is different. They equaled same sex partnerships with heterosexual partnerships by giving them the right to marriage and abolishing same sex partnership law.

He emphasized that marriage is institution that has existed for 2000 years, how marriage guarantees at least 1000 rights and benefits to spouses and that not a single law on same sex partnerships guarantees all the benefits that are guaranteed by marriage. He continued his presentation further by explaining why the legislation about same-sex partnerships cannot be incorporated in the existing legislation. Boris concluded that it is necessary to enact new laws on the entity level that would incorporate all economic and social rights that are guaranteed in matrimonial community. Besides that, he stated that one of the biggest problems our society is facing is non-critical thinking. He gave his personal example, whereas in the beginning he was completely opposed to the idea of same-sex partnerships, by doing research and work on his PhD on the topic of same-sex partnerships he completely changed his mind and became an activist. In the end, he completely supports equaling same-sex partnerships with marriage since he did not come across any legitimate argument against it.

Craig Dwyer is Irish activist who was campaigning in favor of legalization of same-sex marriages for the referendum about legalizing same sex marriages in Irleand in 2015 that ended with positive outcome. He gave overview of LGBT activism in Irleand, starting from 1993 when homosexuality was decriminalized till 2010 when Civil Partnership Act was enacted. He talked about aforementioned referendum in 2015. He added how this victory of equality was influenced by many factors, such as couples that participated in campaign. Campaign was focused on local level through the entire country and relied on political parties, NGOs, grassroots movements, unions, student organizations that gave full support in lobbying. Strategies based on local level, public meetings and people who can talk to certain social groups with certainty of positive outcome are key, he stated.

Craig said in his conclusion that their goals was to organizes network of support, so people from all areas of society and environments work in favor of the campaign. The campaign encouraged all those who were sure that they will vote “yes” to publish on social networks their reasons and to contribute in that way to public opinion.

Video statements by Emina Bošnjak, Predrag Raosavljević can be found in following links:  1, 2 i 3.