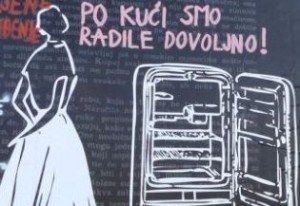 In the Historical Museum of Bosnia and Herzegovina in Sarajevo on Thursday, 9th October, the exhibition “My house is your house” was opened. The  exhibition  was organized by the Sarajevo Open Centre and the Association for Culture and Arts “Crvena”. The exhibition, consisting of excellent works of BH female artist and one very important film, was not just a welcome step, but also a call for  action. “The house, whether it is one street, city, state, or a private house, is and remains a front of everyday struggles for equality and sharing,” said the in their exhibition materials. 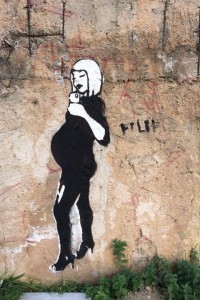 On Thursday, the curator of the exhibition, Danijela Dugandžić-Živanović conducted the visitors and explained that it opens the door for private and hidden places that we all call the house. “Since the members of the “Crvena” are artist dealing with topics relevant to all policies towards women, it was very clear that we can contribute to some changes in the space of the exhibition. I chose five artists with whom I wanted to do a concept by which they produced their works “. Works by Andrea Dugandžić and Adela Jušić, Emina Kujundžić, Sandra Dukić, Lana Čmajčanin, and the movie by Krešo Golik is “From 3 pm to 10 pm” are engaged in unpaid work at home, oblivion, women’s history, violence against women, and statistics on the state of women in the country today. The exhibition at the Historical Museum of Bosnia and Herzegovina will be presented 10 days. 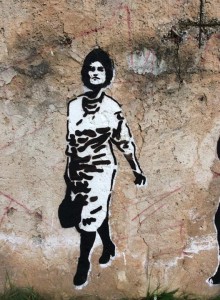 Adela Jušić and Andrea Dugandžić presented a huge mural of a labor of love on the outside wall of the museum that faces the street, indicating the suppression and the exploitation of women’s work and its transformation into a “labor of love”. While representing the work, the artist pointed out that it is often said that housewives are not doing anything. “That’s not true, because it is a work of tangible value that can be calculated. In addition, home work is considered a natural women’s service to society. We disagree, because we know that this job requires a lot of skill and knowledge. This work can not ascribe any kind of naturalness”, said Andrea Dugandžić.

Sandra Dukić set at the table with a white tablecloth, which was covered with gauze and medical buckles, and under the gaze were broken plates.  Text saying “Fell by herself, killed by herself” was posted above her in an embroidered inscription, which is the title of her work/performance. While Sandra set in silence embroidering, participants were able to listen to the audio recording, an interview with one of the women, beneficiary of a safe house in Banja Luka. The saying ” Fell by herself, killed by herself ” is often used to put the blame on the choice of a woman who stays with the abuser. “It was important that the audience gets a sense of unease and bitterness that I had in the safe house. The life story of the beneficiary of safe house is perhaps one of the best ways to show people that situation because women undergo a long-term destruction of self-confidence and fear. ”

The artist Emina Kujundžić, on the background wall of Historical Museum, drew nine women within her part of the exhibition “Silk and satin”. Through these clothes of the women Emina indicates that they walked through liberation, emancipation and rebellion. 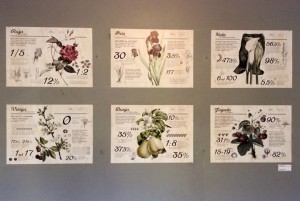 In her works, “Nature statistics”, artist Lana Čmajčanin drew flowers and fruits whose names women in BiH also carry, representing  the official statistics on the state of women in the country in the areas of education, political life, and health status of Roma women.

Finally, the film “From 3 pm to 10 pm” follows one day in the life of female workers, in the ’60s in former Yugoslavia, and shows the complexity of life, work and the system that survives thanks to the fact that one instead of eight, they worked for nineteen hours a day.