On Saturday 18th July we opened the “Žarana Papić” School of Feminism for the 6th generation – 27 students from all over Bosnia and Herzegovina. 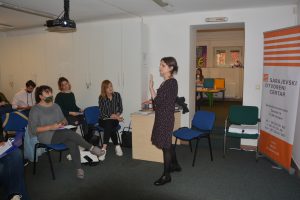 First lecturer was Jasmina Čaušević, who has a master’s degree in Gender Studies. She is author of numerous publications in the field of queer studies and feminism. 250 years ago, although such ideas were sporadically present in the Middle Ages, it was realized that women’s education was the main precondition for them to be able to show their abilities and become economically independent, but also to participate equally in political life – be political subjects and gain political power.

Yet, instead of becoming the basis of further intellectual and any other action of women, education has become a way of reproducing a repressive, patriarchal-defined discourse of power. Through linking activism and theory, a historical overview of the emergence of women’s, feminist, LGBT/queer, gender and other studies – was presented to answer questions about how education and knowledge can become a place of de/construction and what are the positions and perspectives of feminist and other studies in formal education.

The aim of the session was to show what alternative courses, schools and programs offer in relation to standardized knowledge and how they can contribute to it. Participants had the opportunity to get acquainted with the different waves of feminism, its division and ideology in general. 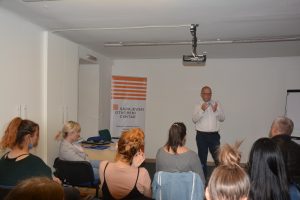 The second part of the lecture was led by Alen Kristić, a theologian, publicist, translator and peace activist. His lecture: Feminist Theology, Sexuality and the Body on the Example of Paradigmatic Female Characters from the Christian and Islamic Tradition pointed strategies by which strong female subjects in both traditions were distorted into objects. He presented fundamental starting points, goals, and methodologies of feminist theology, which simultaneously represent discourse, practice, movement, and spirituality.

In the second part of the lecture, Alen Kristić presented the achievements and future tasks of feminist theology, emphasizing the need for cooperation between secular and religious feminisms, which for both sides is a lasting challenge of self-criticism and learning.

At the end of the day, the participants expressed their satisfaction by saying that the lectures took place in a very pleasant atmosphere, and described them as very useful. 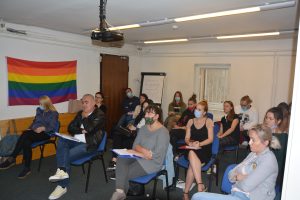 “Feminism is a way of life, a value we live.” – Jasmina Čaušević.

“Feminist theology is a passionate search for a discourse about God, which every human being without distinction,  everything that makes up the world around us, both plants and animals, will experience as an unconditional touch of gentleness, tenderness and love, not a threat, restraint and condemnation. ” – Alen Kristić