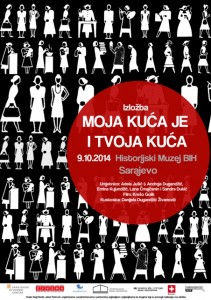 The exhibition is the joint project of the Sarajevo Open Center and Association for  Culture and Art CRVENA, realized with the partner support of Heinrich Böll Foundation Office for BiH and the Embassy of Switzerland in BiH.

With this invitation, full of welcome, we are opening the door of a private and hidden place that we call home. It, being the space for family, also becomes the space of oppression, unpaid labor, fears and violence.  The family is represented as the basic unit of capitalistic society with clearly defined role for the woman and with already set limits for behaviours in order to preserve the patriarchal system and the nation. And as much as the role of a woman at home is important her political and social significance is neglected both in private and public sphere. In this century, public and private, but also the border between the two, were the places of feminist resistance, struggle for the rights and better conditions of life and work. Many of these rights were gained but the struggle is not over yet. That will remain the case as long as, in both public and private sphere, the power models are not changed and women’s emancipation is not set as the foundation of every future political struggle and the long-lived concept –“family belongs to women and state to man” is not transformed.  Home, whether it is a city, street, state or one’s own house, is and remains the daily front of struggle for equality and unity.

Therefore, “My house is your house, too” challenges the rigid discourses of dominance and power and it represents the space for thinking about everyday life and re-thinking the society using emancipatory foundations of the commons and the political. It discloses and opens to everyone because it represents the responsibility that we all share and call upon.

The issues that we are dealing with are the issues raised in the last hundred years. Some of them were resolved through feminist and women’s struggle de jure but not de facto. In today’s Bosnia and Herzegovina, the issues of unpaid labor, domestic labor, family care, violence against women, remain in the core of women’s struggle.

The artists Adela Jušić and Andreja Dugandžić collaborating on the work titled “The Labour of Love” examined the concept of the unpaid domestic work through the relation of private and public, emphasizing how the exploitation of female labour is covered-up and its  transformation to labour of love considered to be “naturally” women’s and as such defines the position and the role of women in society.

The film “From 3 to 22” follows one working day in a life of female worker, in the 60ies, in the former Yugoslavia. It shows all the complexity of life, work and system which survives only because she is working 19 hours per a day instead of 8 hours. Instead of “8 for Work, 8 for Rest, 8 Hours for what you will”, she is constantly taking care of a child, husband, home and diligently working in the factory.  So, in socialism the patriarchy was transformed and internationalized through invisible woman’s work, responsibility for home, children and family.

Emina Kujundžić, in her work called “Silk and Velvet”, portrays women that we have forgotten: The clothes they were wearing show how they were stepping down the roads of liberation, emancipation and rebellion. The truth about those of them who were pushing the limits, opposing conventions and representing the faces of a struggle is the truth that we have to learn.

Sandra Dukić, using the well-known saying YOU MADE YOUR BED, NOW LIE IN IT introduces the omnipresent violence, revealing it to others while in the same time calling for responsibility to stop it. The relation to violence as the private problem and its explanation through condemnation on a woman and the choices she makes, by well-established manner of shifting the guilt from the perpetrator to a woman who is subjected to violence, is the tradition which perpetuates and normalizes the roles of the victim and perpetrator.

In the work of Lana Čmjačanin called “The Nature of Statistics” the personification of nature is double: personal and statistical. The typical representative woman-nature relation is no longer passive denotation. The material nature of the statistics of position of women in BiH is wordless, while the nature becomes personal, political, public, live space of female voices, names, their visibility standing behind all these numbers and their passive politics.

“My house” is the mirror of the houses in our world and the place of articulation, celebration, memories and discovery of invisible battle-fields of women’s history and their struggles in the space which is overstepping and destroying the boundaries between the private and the public.

Thanks: Sanja Ravlić, Jelena Petrović, woman artists, colleagues and partners, friends as well as all the others who helped the realization of this exhibition.

The work was inspired by the works of Mariarosa Dalla Costa, Selma James, Silvia Federicci and the movement ”Wages for Housework”.

A women reproduces free of charge the labor force that is quintessential in capitalism. She gives birth, raises, services and loves that labor force that will be used (exploited) by the capitalism. Her work is fully degraded, skillfully masked into work from love, so that as such it is not viewed as social and economic activity that has a value, but rather as a natural service of women for the society. A woman performing housework is a force of the overall human work, permanently abused to the benefit of capitalist accumulation.

The systematic attack against women is directed towards their whole being, including their sexuality. In a patriarchal and capitalist society, female sexuality is reduced to passiveness, receptiveness, sublimation, and even resistance to her own sexual drive. She serves capitalist goals that see the function of the womb, vagina and clitoris only in the reproduction of labor force. Within the isolated sphere of home, woman is an object through which man expresses the dissatisfaction with the system exploiting him and over which man exercises power he is denied by such a system.

Being denied the autonomy and creativity, both in their sexuality and the process of social and economic production, women recognize and build their identity only based on the role of housewives. Isolated within the house ghetto, they do not learn about their own political capacities, possibilities of their use and possibilities of social organization.

We have done enough of housework! 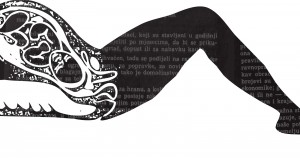 YOU MADE YOUR BED, NOW LIE IN IT
Sandra Dukić, Performance, 2014

YOU MADE YOUR BED, NOW LIE IN IT is a work in which I speak about the relationship of our society towards women that have suffered domestic violence. I put the audience in the role of listeners and observers, while I talk about the experience of a woman who was at a safe house. This story calls for responsibility of everyone who knows about violence. Violence cannot and may not be ignored. We must raise awareness of it, reveal it and make all those who close their eyes to this problem face it. Through this work, an intimate story becomes public, interrupting thus the tradition of viewing violence as a taboo and sweeping it under the carpet. Her story becomes also my story, the intimacy that reveals and teaches in an uncomfortable and painful way.

SILK AND VELVET
Emina Kujundžić, Stencill graffiti on the wall 2014

The work follows the way of dressing of women from Bosnia and Herzegovina over the past hundred years. Although the work was made chronologically, this is not about an overview of the development of a certain idea or its materialization. Every figure represents a separate moment, deprived of a defined narrative. The contextual importance of such a moment, however, may be clearly recognizable, but it does not have to; its value is at moments fully personal, since four figures represent my mother, grandmother, great-grandmother and me, and as such, it is subject to multi-layered interpretations.

Throughout history, female clothes have served the purpose of oppression, by limiting movements and thus limiting activities. At the same time, by focusing on female appearance, fashion objectivized the female body, whether by celebrating its beauty or by hiding it. Instead of having the purpose of an esthetically expressive means, clothes here are a unit of functionality and a testimony of the position of woman at a certain point of time.

The movie follows a workday of a woman from the morning until the evening. After the work at a factory, she does the housework, takes care of her child and deals with the material issue of making the ends meet. Her husband comes and goes, eats and sleeps, where she continues dealing with household issues until late, in order to be at her workplace at the factory early in the morning, again on time. 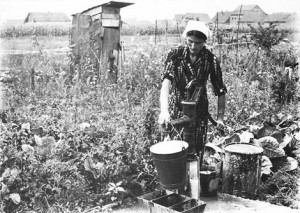 The use of the word statistics in daily life is mostly related to figures that we use in order to try to describe important characteristics of a group of data.

Through such a contextualization of statistical data I speak about the problem of the unfavorable and subordinated social, legal and socio-economic position of women in the modern capitalism and patriarchal society through current statistical data presented in the public in Bosnia and Herzegovina.