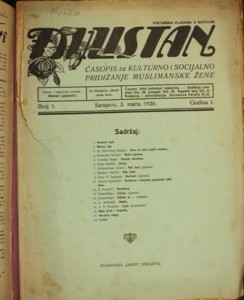 Alma Krpuljević Hanić, a student of the Women’s Political Academy organized by the Helsinki Citizens’ Assembly Banja Luka, made in cooperation with the Bosniak Institute in Sarajevo, the selection of texts from Đulistan, the first Bosniak women’s magazine, focused on raising “social and cultural awareness of Muslim women”, appeared in 1926 and published only three issues in the period from March to May 1926. The magazine focused on modernisation and the reform of the social status of Bosnian Muslim women and their cultural and educational transformation (Kujraković, N. (2010) Đulistan, prvi bošnjački ženski časopis, in Diwan, godina XIII, broj 29-30). It promoted education and emancipation through religious and patriarchal frameworks. Ahmed Ljubunčić, editor in chief of the magazine, wrote the following, among other arguments, in the editorial of the very first issue of the magazine: “Let’s organise ourselves, Brothers! Let’s disarm the hard-core conservatives to whom a woman is just an object, a thing. They must understand that a woman is right to seek, through science, the paths of utter human perfection (…) time has come to solve our most important issue – the issue of our woman.”