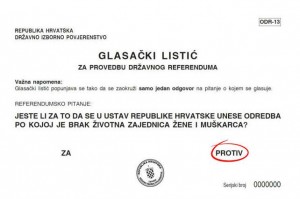 SOC strongly condemns the employees of the Catholic Education Centre “Sveti Franjo” in Tuzla for their discrimination against LGBT people and their unprofessional behavior. Just before the referendum in Croatia, a school counselor encouraged a fourth grade class, which consisted of mostly Croatian citizens, to go to the referendum and vote FOR in an attempt to address general human morality. It is unacceptable for schools and school officials, who are responsible for the promotion of education, tolerance, individualism, and the development of young minds, to use these circumstances to promote and impose their own views. This is especially true considering it is against the law in Bosnia and Herzegovina – namely the Law on the Prohibition of Discrimination.

SOC reported this incident to an informal group of LGBT activists from Tuzla, whose reaction and views are shared with you below:

On 29 November, 2013, in the Catholic Education Centre “Sveti Franjo” in Tuzla, there was an incident in which a group of students felt humiliated and insulted, so we feel the responsibility to react.

Specifically, an educator and psychologist named Zlatko Spoljarevic told a group of fourth graders his own subjective opinion about the referendum in the Republic of Croatia: “All of you adults with citizenship in the Republic of Croatia have the moral, human, and civic duty to do the right thing, go to the referendum, decide this question about general human morality and vote FOR. In the name of the family!” And then he posted a promotional poster for the citizen’s initiative “In the Name of the Family” on a bulletin board in the school’s hallway.

Schools and universities should encourage creative and critical thinking, discursive dialog, and the development of individual personalities, and not reproduce their own opinions. The duty of schools’ teachers and psychologists is to create a welcoming atmosphere at school and be at one’s disposal for advice, especially at such a delicate age. Communication with children should be inspiring and motivating, gentle and warm, with respect for each individual child and their personality.

With this action, Spoljarevic did exactly the opposite, discriminating against and degrading sexual minorities with an audience listening from the benches. The LGBTQ community is the target of judgment and violence every day, and at least a school should be a secure place. The teacher/psychologist, with his actions, made it clear that their behavior is unnatural and immoral, and they don’t deserve the same rights as those who are “natural and moral,” which incites hatred and approves the oppression of those that are different.

On the poster that now hangs in the hallways, there is a “perfect” family – a father, mother, and two children. This implies that those who did not grow up in such a family – those who had single parents, a grandmother, an aunt or an uncle, or two mothers – feel incomplete and less valuable. Hereby he violated the code of conduct of the teaching staff.

Here are some of the thoughts of the students who were present during the teacher/psychologist’s announcement:

“What happened today was very hurtful: the teacher/psychologist of the school insulted so many people who I love and who mean a lot to me.”

“Having parents doesn’t mean strictly having a mother and father. It means having people who are always there for you and support you, who would give everything for you. Let us kiss and love whomever we want; as long as there’s love, it’s OK.”

“The message I got from our teacher/psychologist today is that I’m an immoral person, along with many other people that I know, respect, and love. The entire situation seems so unfair, especially when you take into account all those students who do not have strong opinions about the situation and who will simply take for granted that the teacher is an authority and will believe what he says. Because ‘why would it be wrong if a teacher says it?'”

“If that which makes you happy and satisfied by ACCIDENT (by birth or however) happens to fall into a “social norm,” does that mean that people that are made happy by different things don’t have the right to happiness? Isn’t this just violating our human rights that we talk about so much?”

“I don’t understand how we’ve come to condemn love. A few days ago, an employee of the school declared that everyone should support the inability of homosexuals to marry. He transmitted the message to all of us, not even asking what we think. We don’t need to tolerate a person who, in his position, spreads a message of hate in a school.”