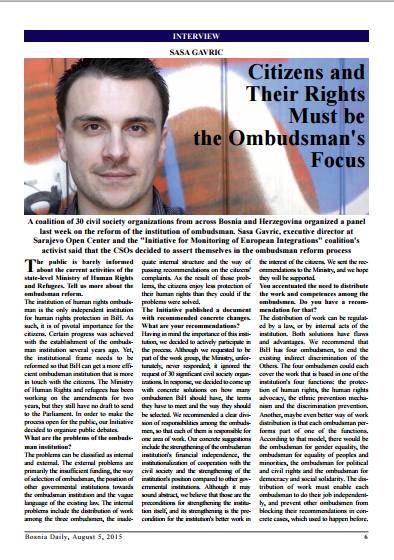 A coalition of 30 civil society organizations from across Bosnia and Herzegovina organized a panel last week on the reform of the institution of ombudsman. Sasa Gavric, executive director at Sarajevo Open Center and the “Initiative for Monitoring of European Integrations” coalition’s activist said that the CSOs decided to assert themselves in the ombudsman reform process

The public is barely informed about the current activities of the state-level Ministry of Human Rights and Refugees. Tell us more about the ombudsman reform.
The institution of human rights ombudsman is the only independent institution for human rights protection in BiH. As such, it is of pivotal importance for the citizens. Certain progress was achieved with the establishment of the ombudsman institution several years ago. Yet, the institutional frame needs to be reformed so that BiH can get a more efficient ombudsman institution that is more in touch with the citizens. The Ministry of Human Rights and refugees has been working on the amendments for two years, but they still have no draft to send to the Parliament. In order to make the process open for the public, our Initiative decided to organize public debates.

What are the problems of the ombudsman institution?
The problems can be classified as internal and external. The external problems are primarily the insufficient funding, the way of selection of ombudsman, the position of other governmental institutions towards the ombudsman institution and the vague language of the existing law. The internal problems include the distribution of work among the three ombudsmen, the inadequate internal structure and the way of passing recommendations on the citizens’ complaints. As the result of those problems, the citizens enjoy less protection of their human rights than they could if the problems were solved.

The Initiative published a document with recommended concrete changes. What are your recommendations?
Having in mind the importance of this institution, we decided to actively participate in the process. Although we requested to be part of the work group, the Ministry, unfortunately, never responded; it ignored the request of 30 significant civil society organizations. In response, we decided to come up with concrete solutions on how many ombudsmen BiH should have, the terms they have to meet and the way they should be selected. We recommended a clear division of responsibilities among the ombudsmen, so that each of them is responsible for one area of work. Our concrete suggestions include the strengthening of the ombudsman institution’s financial independence, the institutionalization of cooperation with the civil society and the strengthening of the institution’s position compared to other governmental institutions. Although it may sound abstract, we believe that those are the preconditions for strengthening the institution itself, and its strengthening is the precondition for the institution’s better work in the interest of the citizens. We sent the recommendations to the Ministry, and we hope they will be supported.

You accentuated the need to distribute the work and competences among the ombudsmen. Do you have a recommendation for that?
The distribution of work can be regulated by a law, or by internal acts of the institution. Both solutions have flaws and advantages. We recommend that BiH has four ombudsmen, to end the existing indirect discrimination of the Others. The four ombudsmen could each cover the work that is based in one of the institution’s four functions: the protection of human rights, the human rights advocacy, the ethnic prevention mechanism and the discrimination prevention. Another, maybe even better way of work distribution is that each ombudsman performs part of one of the functions. According to that model, there would be the ombudsman for gender equality, the ombudsman for equality of peoples and minorities, the ombudsman for political and civil rights and the ombudsman for democracy and social solidarity. The distribution of work must enable each ombudsman to do their job independently, and prevent other ombudsmen from blocking their recommendations in concrete cases, which used to happen before.