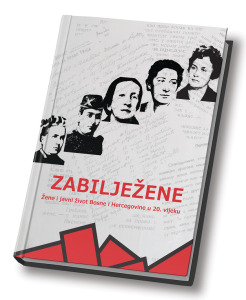 All guests in rubric Her 5 minutes in their year’s successes counted great ideas, projects and creative breakthroughs. We don’t have a room to name them all, but this is a modest choice of what we want to once again draw attention – the work and activities of successful women from Bosnia and Herzegovina. This year, as part of the list are also successful events and projects that have contributed to the fact that feminism and its different considerations become part of a larger public sphere. They have made a difference, they went ahead and they will surely show the way and motivate many women that we will write in future…

A great publishing venture of Sarajevo Open Center, developed in collaboration with the Heinrich Böll Foundation in BiH, the CURE Foundation and the Embassy of Switzerland in Bosnia and Herzegovina, the books Women Documented – Women and public life of Bosnia and Herzegovina is one of the highlights of feminist events in 2014. This unique publication, that also has an amazing textbook potential and would certainly fit great in school curricula (if there is any will for that), is an activist response to the systematic neglect of the many contributions that women have made in BiH.

Throughout nearly 300 pages, the book offers an informative overview of key BiH women who promoted society through artistic, political, scientific, activist, cultural and other work during one hundred years. Coauthors of the book are Amila Ždralović, Aida Spahić, Bojana Đokanović, Arijana Aganović, Elmaja Bavčić, Emina Žuna, Ivana Dračo, Zlatiborka Popov-Momčinović, Fabio Giomi and Zlatan Delić. The editor is Jasmina Čausević, that said for BH Dani: “The important thing is to continue to spread the word about those women who have been successful despite the odds against them, about those women who for the first time in the history of their gender would do something and give their lives for ideas in which they believed. Women Documented shows that the contribution of BiH woman must never be forgotten, and that there are people who will not allow it.