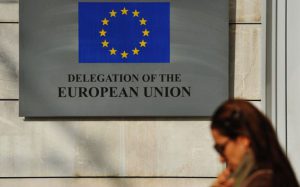 Each year, the European Commission publishes its Report on Bosnia and Herzegovina (previously the BiH Progress Report) which, among other topics and areas, covers issues of status and rights of LGBTI persons. In the previous four years, Sarajevo Open Centre delivered written submissions in order to influence the content of the Report from a standpoint of an NGO that protects and works on improving the rights and status of LGBTI persons. During 2013, the focus of our submissions was on the issue of discrimination, and on the amendments to the Criminal Code of Federation of BiH that was finally amended in 2016 to include hate crime regulation on the basis of, among others, sexual orientation and gender identity.

The 2014 Report prioritized the issue of registered complaints to the Ombudsman Office – it had been established that a low number of LGBTI persons used this mechanism to protect their rights, which further points to distrust toward the institutions and their low proactive role. Also, it was observed that the police had failed to respond adequately and protect the participants of the festival Merlinka who were attacked in 2014.

Observations and recommendations from the 2015 Report were directed towards the state’s obligation to regulate prohibition of discrimination on grounds of, among others, sexual orientation, gender identity and sex characteristics. This was finally achieved in 2016, with the efforts and contribution of Sarajevo Open Centre. Once more, the need to regulate hate crimes on grounds of gender identity and sexual orientation in the Criminal Codes of Federation of BiH, Republika Srpska and Brčko District was emphasized.

The 2016 written submission contains recommendations that point out the need to prosecute the attack on Merlinka Festival in 2014, as well as the attacks in Art Cinema Kriterion. The recommendations are directed towards the need to adopt the BiH Action Plan for Equality of LGBTI people and provide the measures to combat inequality on grounds of sexual orientation, gender identity and sex characteristics. The Law on Prohibition of Discrimination was amended this year, as well as the Criminal Code of Federation of BiH that now regulates hate crimes on grounds of sexual orientation and gender identity. BiH has not yet dealt with the rights of transgender persons and same-sex couples.

Concerning rights of lesbian, gay, bisexual, transgender and intersex (LGBTI) persons, the Blood Transfusion Institute of the Federation amended its blood donation regulations and deleted discriminatory provisions. The law enforcement body in the Sarajevo Canton showed willingness to appoint a direct contact in every police station for LGBTI persons.

Discrimination against LGBTI persons remains widespread. LGBTI activists continue to be subject to threats and harassment. The adoption of amendments to the Federation criminal law including hate crime for the first time, amongst others on the grounds of sexual orientation and gender identity, failed due to the lack of support in the Federation House of Peoples. Hate speech and intolerance remain an issue of concern.

Concerning rights of lesbian, gay, bisexual, transgender and intersex (LGBTI) persons, the anti-discrimination law did not include a clear definition of gender identity and sexual orientation and refers to sexual expression and/or orientation as grounds of discrimination. Sexual orientation and gender identity are not included as grounds for hate crime in the criminal law of the Federation. In the Sarajevo Canton, 19 police officers were trained on LGBTI rights.

Discrimination against LGBTI people remains widespread. Hate speech, hate crimes and violent attacks against LGBTI people and human rights defenders have increased along with the higher visibility of the LGBTI community. The number of complaints on discrimination and violence officially registered with the police and the Ombudsman remains low. Awareness on LGBTI rights remains very low among the judiciary, law enforcement agencies and the general public. Participants in the LGBTI film festival Merlinka in Sarajevo in February were attacked and two were injured. Police did not intervene promptly to ensure protection. Hate speech and hate crime remain an issue of concern.

On the rights of lesbian, gay, bisexual, transgender and intersex (LGBTI) persons, the 2015 LGBTI Merlinka festival was held with no incidents and with appropriate police protection. Bosnia and Herzegovina was one of the signatories of the Joint Statement of Ministers of the region at the 2015 IDAHO (International Day against Homophobia) forum.

Despite an increase in violence, attacks and threats towards LGBTI persons and human rights defenders, only a limited number of cases were reported to the police. In September, Bosnia and Herzegovina’s Constitutional Court ruled on a violation of the freedom of assembly in the case of the October 2008 Queer Sarajevo Festival when a dozen individuals were attacked, but there has been no criminal prosecution of the attack on the 2014 Merlinka Queer Film Festival. Transgender persons are a particularly marginalized group and no measures are planned for legal gender recognition.

Regarding the rights of lesbian, gay, bisexual, transgender and intersex (LGBTI) persons, two years after the attack on the Merlinka Festival in 2014, no one has been indicted. Unfortunately, another attack on LGBTI persons occurred in March in Art Kriterion Cinema, including physical attacks, threats and hate speech. Their bias motivation was disregarded and the police classified the attacks as misdemeanours. Governments of the Federation of BiH and Republika Srpska, with passing the Annual Operational Plans, address the number of LGBTI measures to be undertaken by the institutions. A state-level Operational Plan should be adopted by autumn, ensuring a more systematic and active approach of BH institutions to LGBTI human rights and inclusion.

The Draft Law on the Amendments of the Law on Prohibition of Discrimination that includes sexual orientation, gender identity and sex characteristics as protected grounds is in the parliamentary procedure, and its awaited adoption would put BiH among one of the first countries in Europe to ban discrimination on the basis of sex characteristics and provide better protection from discrimination for intersex persons. Parliament of Federation of BiH, six years after Republika Srpska and Brčko District, amended the Criminal Code and included hate crimes on the grounds of sexual orientation and gender identity. No efforts were taken to simplify the procedure of legal sex change for transgender people, and the legal system fails to regulate any of the social and economic rights of same-sex couples, or to legally recognize the rights and mutual responsibilities of these couples.