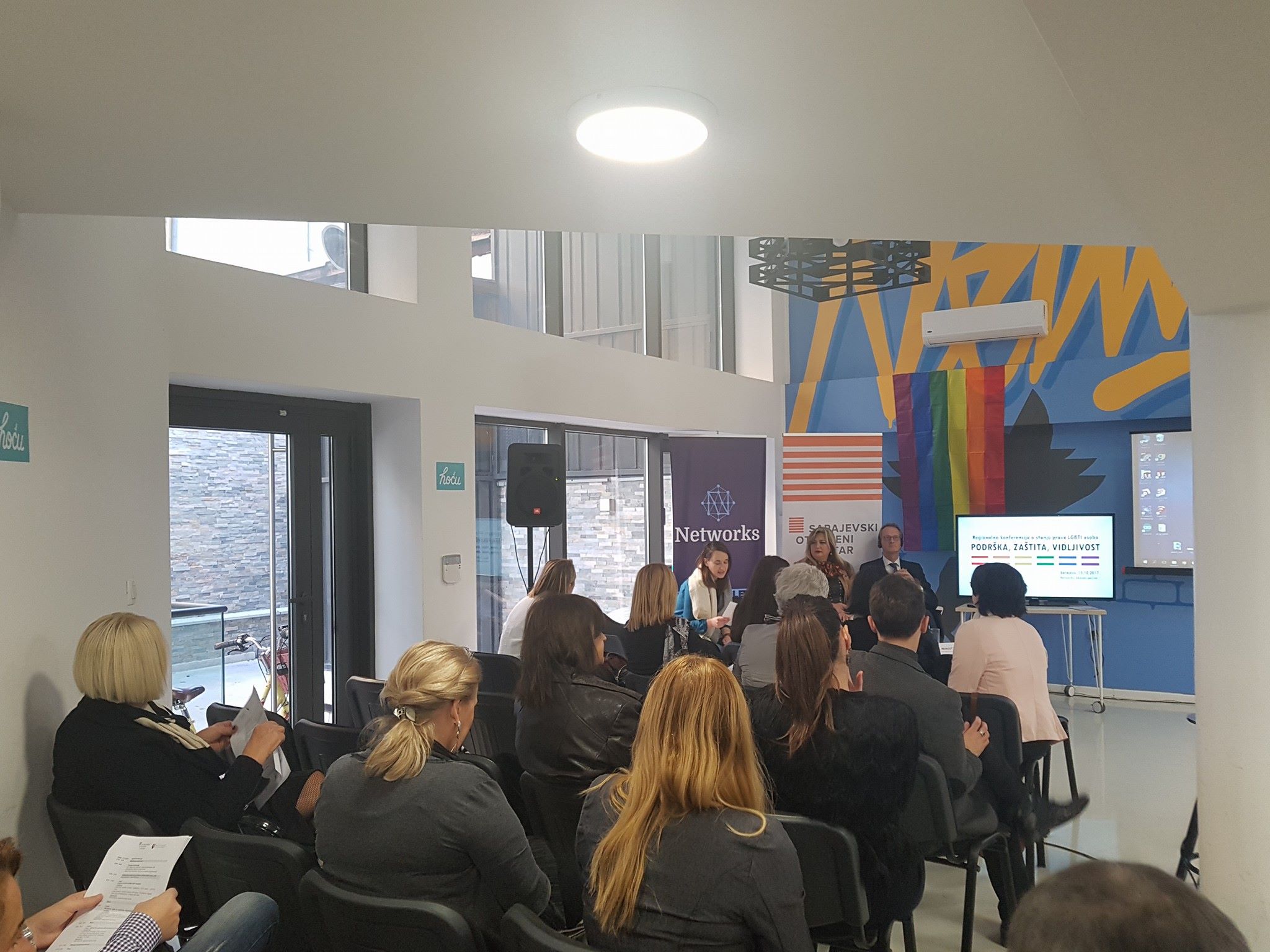 On 13th of October a regional conference on the situation of LGBTI people in the region was held, under the title “Support, Protection, Visibility”, and it was organized by Sarajevo Open Center and the Agency for Gender Equality of Bosnia and Herzegovina.  The conference was opened by H.E. Ambassador Reinout Vos from Embassy of the Netherlands in BiH who are financial supported this conference through MARTA program, Emina Bošnjak, Executive director of SOC and Samra Filipvić-Hadžiabdić from Agency for Gender Equality of Bosnia and Herzegovina. Amar Numanović introduced extensive research on over 366 LGBTI people in our country. Research is the basis for understanding the status of LGBTI people at all levels, including family support, the state of justice, the police and other state instruments that should be in LGBTI service as we are equal citizens. The conference had three panels with speakers from Montenegro, Croatia, Serbia, Macedonia, Turkey and of course, Bosnia and Herzegovina.

For LGBTI people, to come out is still the hardest in the family, as research has shown. Feride Unal from Turkey and Sanja Stanojević from Croatia have been talking about how to tackle the issue of parents who refuse to understand their children and children who live in fear of constant rejection and losing, not just love, but also the roof over their heads. Through her intimate story of her son’s coming out when he was nineteen and her own breakthrough in front of an unknown situation, Feride spoke mostly of her acceptance and her later activism to help other parents of LGBTI people. “When he told me he was actually a man,” Feride said through tears. “I was paralyzed, I was thinking about suicide. But some voice in my head told me that this is my child and if I can not be there for him, who will be? ” 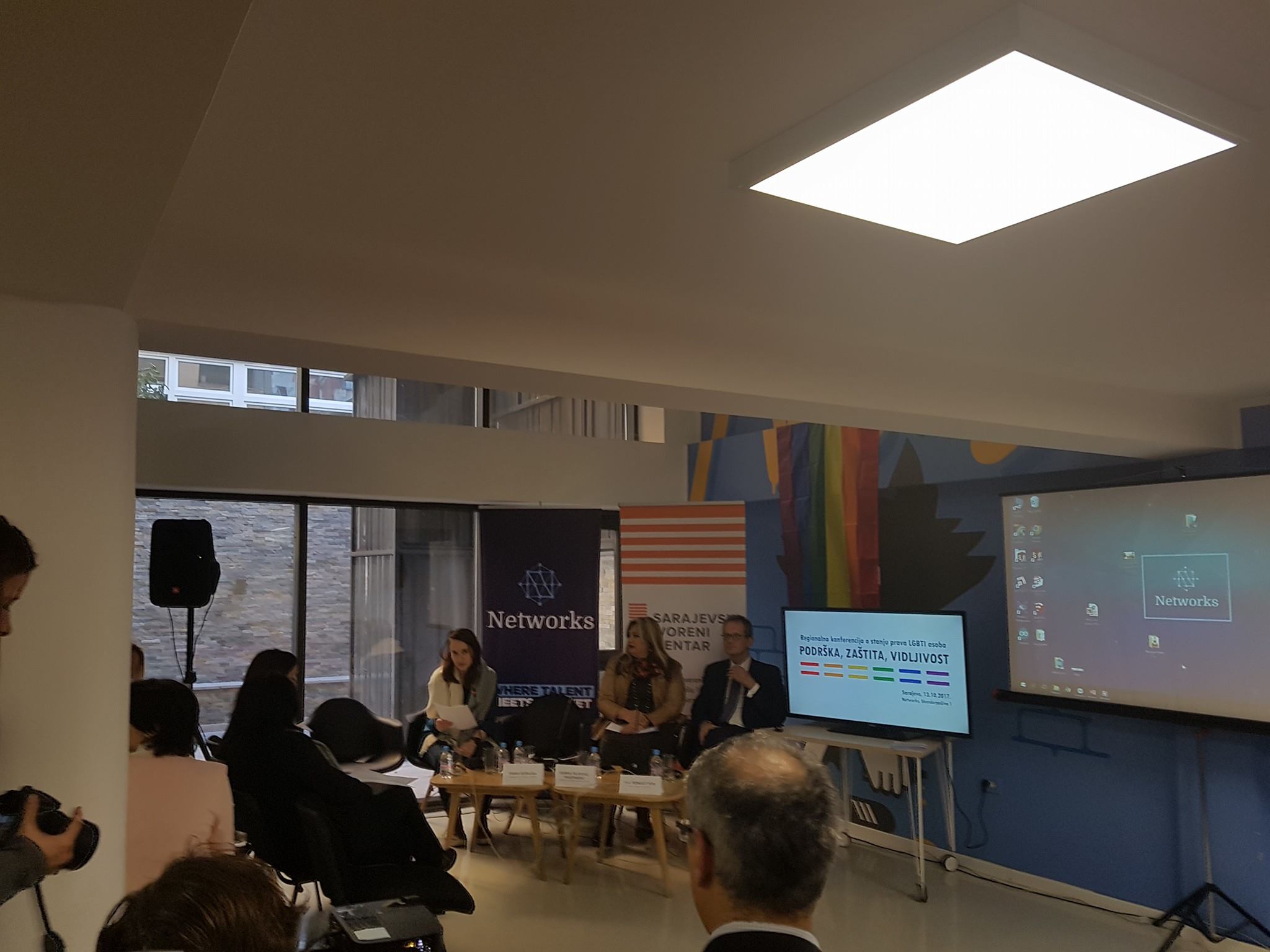 Sanja Stanojević from Zagreb’s “TransParent” did not miss to point out the lack of understanding and responsibility that parents show towards their LGBT children. “If the child has no choice whether to be LGBTI or not, why would parents have a choice whether to accept it or not? It is necessary to introduce the family law that the rejection of the child is punishable and that it falls under the neglect of children. “Her son came out as a transgender boy at the age of seven and since then, Sanja has been carrying a heavy battle through the bureaucratic affliction of the Croatian state. Višnja Ljubičić, Gender Equality Ombudsperson, pointed out that there are trained experts in Croatia for the process of gender adaptation, but they refuse to do it and put it into active practice, so transgender people must also seek out the solution abroad, often in neighboring Serbia . The same problem, she added, they didn’t have when it was necessary to upgrade or operate the gender of men who were injured during the war. The short film, directed by Elma Islamović,  “Unspoken”, about coming out process of a lesbian to her mother was played. Belma Žiga, a psychotherapist who works with LGBTI people, concluded this panel, pointing out that the sense of security is paramount for humans and that it is touching that LGBTI people are patient and full of understanding for the growth of their parents, as could be seen in the movie. 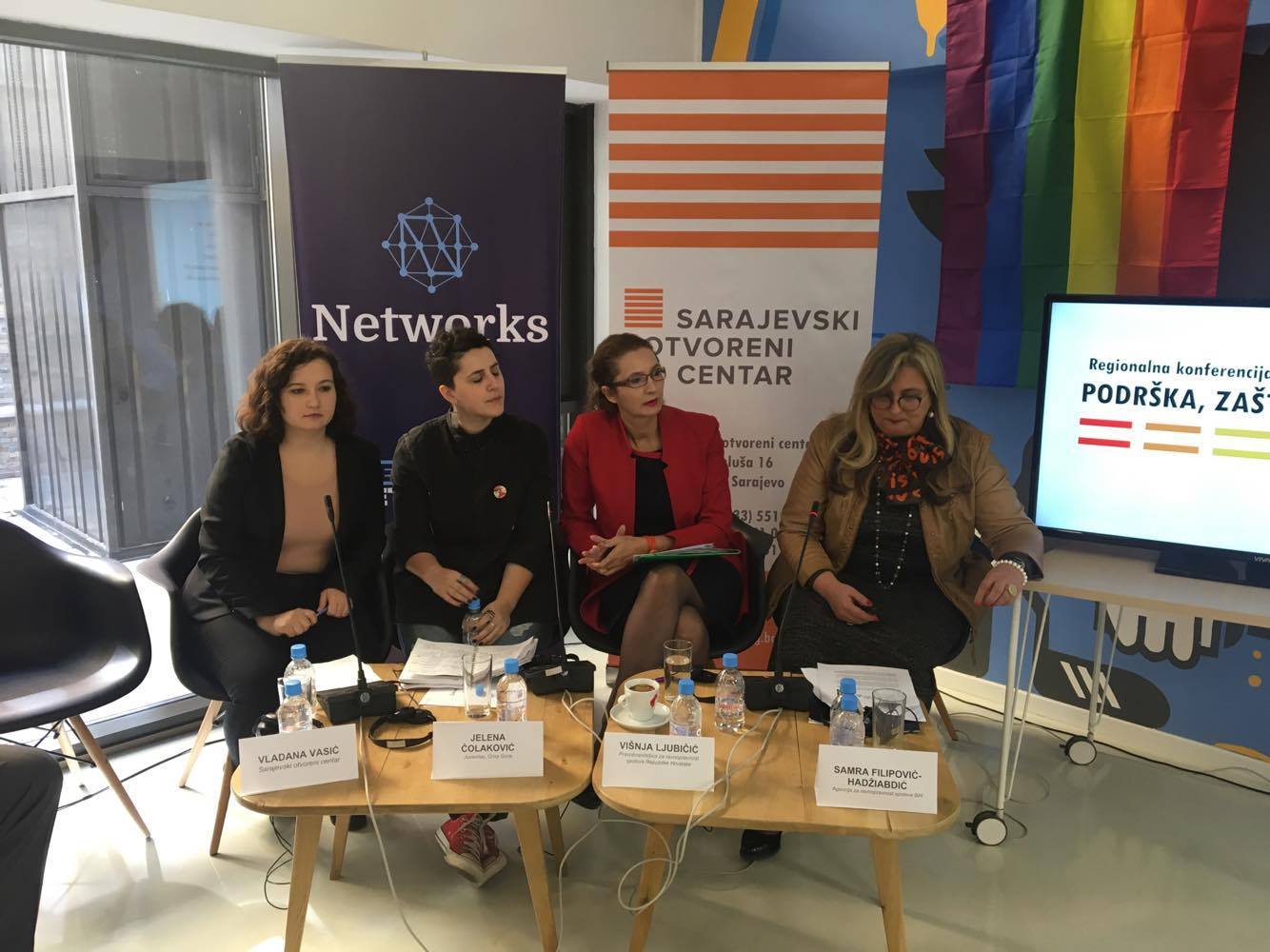 The issue of security is the decisive factor that prevents LGBTI people from coming out to the environment, but also to report discrimination which is very common – even 61.70% of LGBTI people experience discrimination and one in four people some form of sexual harassment. But only 16, 2% of them report this discrimination to the legitimate organs. The most common reasons are mistrust of the police and fear of coming out. What exactly is waiting for LGBTI people, when it comes to approaching legal system was discussed by Jelena Čolaković from Montenegro, Višnja Ljubičić from Croatia and Samra Filipović-Hadžiabdić from B&H. Then, this undoubtedly the biggest problem opened up, and this is the minimal involvement of the state in adapting and adopting the law, implementing it, and willing to help this vulnerable and marginalized group. All steps are taken forward by the non-governmental sector and are followed by the high pressures of activists who are often making actions and the work that the state itself is obliged to do.

All these issues of: safety, coming out, civil protection unite in the complex story of the Pride Parades in the countries of the region which was the theme of the last panel of the conference moderated by Lejla Huremović. Daniel Kalezić from Montenegro Pride talked about the first Pride Parade in Montenegro as well as the political will of the country and that “they could not afford the luxury of not protecting parade” considering that in that year  Montenegro should’ve proven to the EU that they are on the right track. However, they thought it was no longer a priority and they no longer had to deal with it the next year. This, of course, did not stop the awakened wave of LGBTI activists to make the tradition of maintaining the Pride Parade. Jay Poštić from Zagreb Pride says that they now have a successful series of celebrations that they want to preserve in the direction of anti-commercialization and the queer / feminist movement. Anita Mitić from YIHR Serbia spoke about the agonizing struggle in Belgrade, which began in 2001, when the parade drowned in blood, interrupts in the continuity and maintenance of the parade this year that involved compromises with officials of the City whose credibility is practically non-existent. 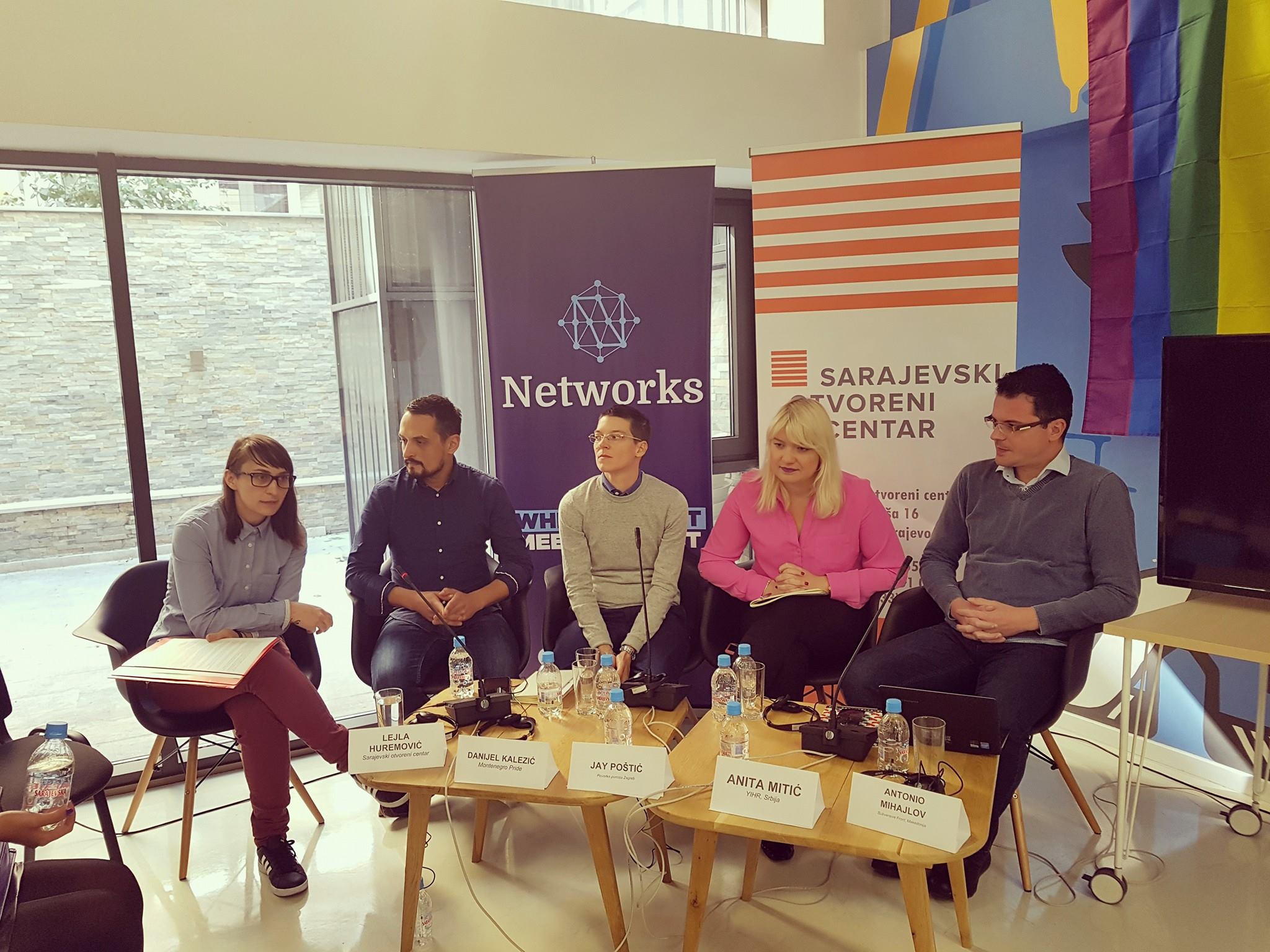 The endangerment of mental health of LGBTI people remains unchanged, people often suffer from anxiety, depression, and suicidal thoughts. The need for further education of health workers, as well as changing the conditions in which LGBTI’s find themselves, those of persistent stigmatization and threats of violence, still remains on the activist table. Research has also shown a great willingness to make life partnerships and marriages so that in the next period we can expect the effort to come up with frameworks for changing laws that define marriage as a community of men and women. Unfortunately, it remains to be concluded that the state in all is doing minimum.