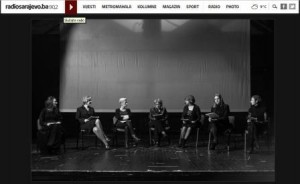 SEVEN is a revolutionary documentary drama based on interviews with seven activists fighting for women’s rights from all over the world. Their life stories and struggles are an unbelievable source of inspiration. Farida Azizi (Afghanistan), Inez McCormack (Northern Ireland), Marina Pisklakova-Parker (Russia), Anabela deLeon (Guatemala), Mukhtar Mai (Pakistan), Mu Sochua (Cambodia), and Hafsat Abiola (Nigeria). Each reading is performed by an ensemble consisting of influential people from different areas of life.

Hedda Krausz Sjogren, an award-winning playwright, actress, and producer, initiated and produced the touring stage reading of SEVEN in Sweden in 2008. The drama has been performed in 13 countries and has been seen by about 20,000 people from Sweden to Afghanistan. Around 500 people have performed the play — men and women, and even a few ministers and members of the European Parliament, artists, even the Oscar-winning American actress, Meryl Streep.

The BiH tour took place in three cities: Sarajevo, Mostar, and Banja Luka, and all three are shown in the documentary film. We recommend that you watch the film. It is subtitled in English.